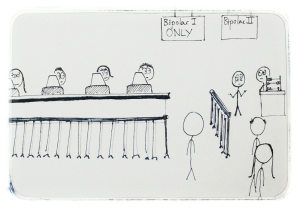 Oh, its only Bipolar II.

I may be slightly more irritable than is often the case, but seeing Bipolar II and Cyclothymia spoken about in the diminuitive has begun to massively irritate me.

I learned that I suffered from bipolar II disorder, a less serious variant of bipolar I, which was once known as manic depression. The information was naturally frightening; up to 1 in 5 people with bipolar disorder will commit suicide, and rates may even be higher for those suffering from bipolar II.

The risk of suicide is far greater with Bipolar II especially, due to the difficulty in diagnosing the condition.  Usually victims of BPII only seek help whilst depressed and their mania is less stereotypical and pronounced.  This often leads to a misdiagnosis of unipolar depression.  This was true in my case, and I was given an antidepressant which hugely…

K and L Do Life

The not-so secret life of a manic depressant.

My battle with bipolar disorder

The ups and downs of being bipolar.

The Mayhem Of Mood Swings

A blog about life with Cyclothymia

Peer-to-Peer support from those who have been there.

I was just getting seasick from seeing too much

Struggles of a Bipolar Woman

Fighting every day, Hoping not to lose the battle

A True Story of Triumph Over Severe Mental Illness

Having a life - again.

The story of how mental illness didn't claim me

Quest for Serenity: Convictions of a Bipolar Mind